Haere Mai and Welcome to the Waerenga Tawhitinui/ Poor Knights Garden at the Tutukaka Marina. 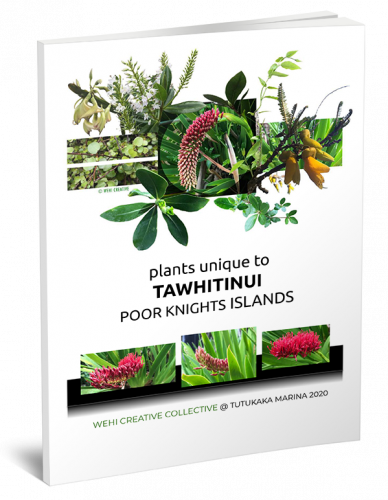 Haere Mai and Welcome to the Waerenga Tawhitinui / Poor Knights Garden at the Tutukaka Marina. This garden is designed to experience the unique flora on the protected Marine Reserve of TAWHITINUI / Poor Knights Islands.

Tutukaka Marina is the gateway to Tawhitinui, one of the predominant international South Pacific locations for dive tourism. These motu are sacred and are a unique place of natural wilderness and rich biodiversity in one of the most significant offshore nature and marine reserves in Aotearoa.

The Tawhitinui / Poor Knights garden in the Tutukaka Marina was made over 20 years ago by Guy and Sandra Bowden from Tawapou Native Plant Nursery. They were originally designed as a display of the unique flora and fauna of the Poor Knights Islands Marine Reserve. The plant guide is interactive with links to the Tawapou website where you will find more information about the Islands, the plants and their habitats.

Download our Waerenga Tawhitinui Plant Guide for more details on the unique plants in the garden, where to find them and how to identify them by their latin and Māori names.

These characters and designs relate specifically to the tribe of Ngati Wai and to its’ member sub tribes of the Tutukᾱkᾱ Coast from as far north as Matapōuri (Ngᾱti Toki and Te Ᾱkitai Hapū/ Sub tribes) through to settlements of Tutukᾱkᾱ and Ngunguru to the south (Ngᾱti Takapari and Te Waiariki Hapū).

The image at the top of the Pou is named Tū-te-Mahurangi, also known as Tūkaiaia ( a Karearea andThe White Bellied Sea Eagle) This bird is a traditional guardian (Kaitiaki) of the Ngᾱti Wai tribe and the importance of this manu (bird) can be evidenced in the famous Ngᾱti Wai whakataukῑ which states,

The bird’s talons can be seen clasping onto the tail end of the Tūtara Kauika. This species of whale is considered as an important protector to the coastal people across the Tutukᾱkᾱ and wider Whangᾱrei regions. The whale is grappling with Whekinui the Giant Squid which is commonly known as a preferred food source of Paraoa the Sperm Whale.

At the base of the Pou stands the carved figure (Tekoteko/Marakῑhau), This figure has been named ‘Aorangi,’ after one of the Poor Knights islands on which an ancient Māori Storehouse (Pᾱtaka), bearing what is a uniquely Ngᾱti Wai designed figure, where is illustrated the use of what looks similar to a set of horns on top of its head. This feature is not common among other tribal tekoteko designs around Aotearoa.

Finally, the floral imagery that can be seen ascending the Pou is the Pohuehue Muehlinbeckia complexa our native plant. This native vine, shrub is commonly seen growing in abundance on the east coast of Northland and in particular, on the Poor Knights Islands and it is also well represented again, at the Tᾱwhitinui Garden here at The Marina.

The Pou Whakairo stands tall and proud, as a guardian of the plants and seeds of Waerenga Tawhitinui / Poor Knights garden and as a symbol of unity and of fellowship between the people of the land (Tᾱngata Whenua) the flora and fauna the marine life and all those who come to share in the beauty of a true icon of Aotearoa New Zealand, Tᾱwhitinui, the stunning Poor Knights Islands.

We have compiled a list of information that links to all the life that contributes to the beauty of the place: birds, reptiles, plants, geology, insects, winds and ocean currents, species migration paths and constellations. 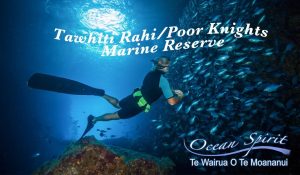 The sheer cliffs of Tawhitinui / Poor Knights Islands plunge into a marine environment that is as stunning and unique as the islands themselves. Marine life abounds within the protected waters of the marine reserve. Dense kelp forests, sand channels, vertical walls, giant sea caves, archways and underwater caverns create vastly different habitats within a small area, providing a niche for more species of fish and invertebrates than can be found anywhere else in New Zealand coastal waters. Add to this a subtropical current that carries marine life from tropical waters, visibility that ranges from 20 to 40 metres for most of the year and you have all the ingredients for some of the best diving and snorkeling to be found anywhere in the world.

Use these links to access information about the life of seabirds at home in Tawhitinui and surrounds. 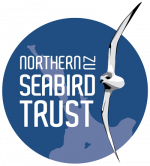 Tawhitinui/Poor Knights Islands are located 20 kms offshore midway between the Bay of Islands and Whangārei Harbour. The islands have been isolated from mainland Aotearoa/NZ for longer than any other group apart from the Three Kings Islands, 60kms northwest of Cape Reinga. What remains today are heavily eroded rims of a large volcano which erupted some 10 million years ago.

Today the group consists of two main islands, Tawhiti Rahi and Aorangi. There are also several smaller islands and rock stacks. 6.5kms to the southwest lay the Pinnacles and the Sugarloaf. Collectively these islands form Tawhitinui, or the Poor Knights Islands Marine Reserve. Rising vertically 100 meters from the sea floor the many land and underwater features of caves and archways are the result of constant erosion during fluctuating sea levels.

Tawhitinui is considered to be eroded rhyolite from the remains of large lava domes, which rose up from a deep fracture running from the Coromandel Peninsula north. The Poor Knights Islands were probably joined by dry land to the mainland for only a few thousand years during the peak lowest sea levels.

For further reading about the geology of Tawhitinui:
Out of the Ocean into the Fire
History in the rocks, fossils and landforms of Auckland, Northland and Coromandel 2017 by B.W. Hayward

We have created a space for people to stop, relax and enjoy the beauty of the garden at the Tutukaka Marina.

Wehi Creative Collective uses holistic creative principles to forge connections with nature and to make places and spaces that people enjoy, relate to and remember.  Art to inspire a respectful human to nature relationship.

Our vision is to use the language of art to promote respectful, responsible and sustainable human interactions so vital to the care needed for the natural environment at Tutukaka Harbour and Tawhitinui / Poor Knights Islands.

Simple creative solutions have massive potential to increase the appreciation of the surrounding environment and strengthen practices of environmental stewardship. We believe we can improve our relationship with nature by recreating the identity of the harbour as a place of outstanding beauty, ecological significance, inspiration and education.

We hope you enjoy an epic experience here at Tutukaka Harbour.